PLEASE NOTE: The Steam Locomotive #15 repairs are underway. No date has yet been set to return the locomotive to service. Our Diesel Engine #6 will pull the train on excursions until such time as our Steam Engine is repaired.

Safety precautions and health guidelines are in place for the benefit of both crew members and our passengers.

We will do our best to accommodate your needs.  We do require masks adhering to the regulations required by the FRA, unless you are enjoying a meal.  Because we want to ensure your safety, we discourage those who are vulnerable, at risk, or ill,  from riding the train until COVID-19 concerns meet your own health issues and expectations. 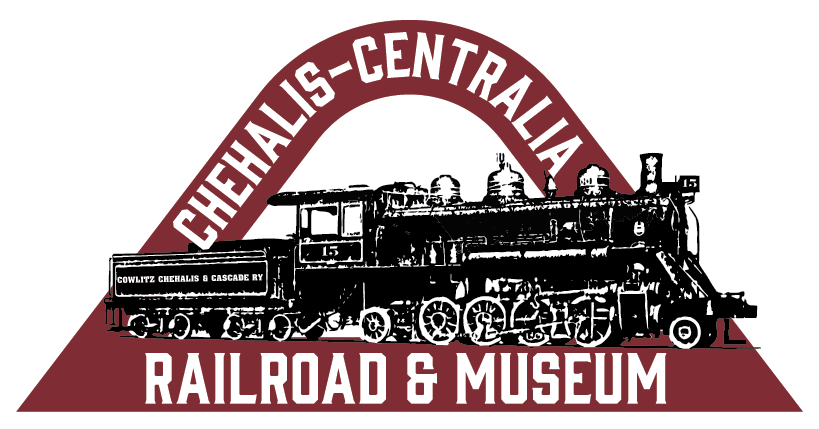 Home to the  Baldwin 2-8-2 “Mikado”, we are proud of our steam train and its AMAZING history. We take pride in the train ride experience, but it wouldn’t exist without this workhorse engine and all of the amazing staff and volunteers it takes to run.

Originally built in Philadelphia, PA in 1916, the Baldwin 2-8-2 “Mikado” was considered the workhorse of the steam train locomotives due to its versatility, and is often regarded as the classic American steam locomotive for this very reason. The 2-8-2’s design allowed for a larger firebox, which resulted in a faster locomotive capable of pulling heavy weight, and originally ran on oil steam.

Lovingly referred to as ‘Ol 15, it first arrived in Washington in 1928, purchased by the Cowlitz, Chehalis and Cascade Railway to transport timber for Washington State’s booming lumber industry. Hauling logs on the Puget Sounds and Cascade Railway in Mt Vernon, WA, it’s route went through Lewis County, Wa to transport lumber to local mills and interchanged with the main railway to export logs as well.

Ol’ 15 worked in the lumber industry for 30 years, docking at the old Chehalis Depot location on 3rd St. and Williams Ave in Chehalis, but was decommissioned as the lumber industry changed its needs for transportation. For 33 years it sat at Chehalis Recreation Park on display, inspiring many train and history enthusiasts. One enthusiast in particular, Harold Borovec, instigated the renovation of our Baldwin “Mikado” and with the support of passionate local volunteers, the City of Chehalis granted the train’s release to Mineral, WA where restoration began in 1987. It took 2 years and 5 months, hours and hours of mostly volunteer labor, going as far as to hand tool parts that were no longer available to purchase, but it was finally brought back to life. On its inaugural send off, many supporters drove north just to be among the first to ride in its newly refurbished passenger cars back to its home in Chehalis.

It is because of hardworking and passionate volunteers that the Chehalis-Centralia Railroad & Museum was founded. The Baldwin 2-8-2 “Mikado” now has a new lease on life, bringing joy and new experiences to tourists of all ages. 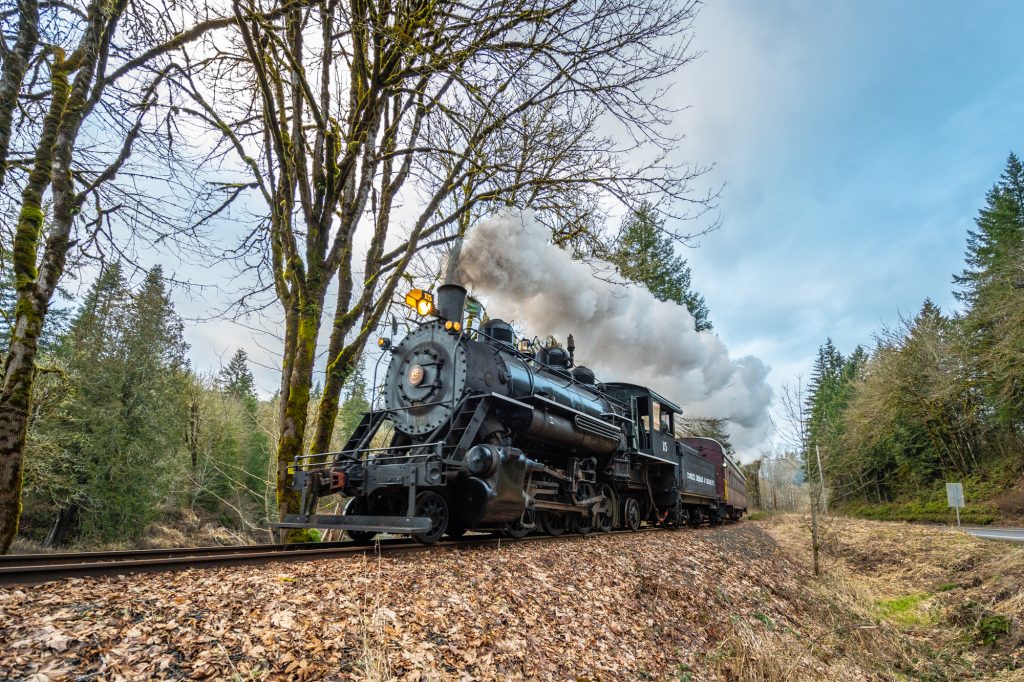 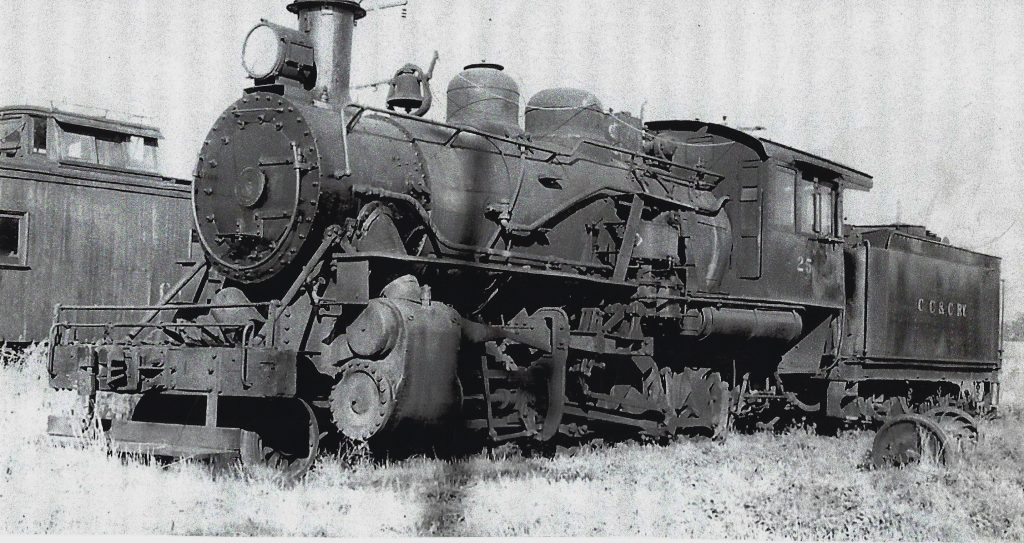 In 1920, the original number was 2501 on the spot plate. And the name Big Jack written on the side with Whitney Co. flanked by green shamrocks on the side of the slope back tender. The locomotive was equipped with both steam and air brakes, and featured acetylene lighting. Big Jack was put to work on the Whitney Company’s logging lines in the areas of Blind Slough, Tillamook and Garibaldi Oregon. Around 1927, Big Jack was sold to Tideport Logging (AKA Tidewater Timber) of Jewell Oregon and became their #53. Later it was again sold to the logging line Astoria Southern and operated in the Olney and Youngs River area in Oregon, before finally finding its home with the Cowlitz, Chehalis and Cascade Railways (CC&C), where it received its #25 so that it fit in with CC&C’s #15 and #20.
In July of 2007, the City of Centralia donated the #25 Locomotive to the Chehalis Centralia Railroad. Locals remember this 1917 Baldwin 2-8-0 as a display Locomotive at Fort Borst Park in Centralia. This “sister” to the #15 Cowlitz, Chehalis & Cascade also was used to haul logs between East Lewis County and Chehalis. When the Cowlitz, Chehalis & Cascade disbanded on May 9, 1954, the #25 was donated to the City of Centralia. To move the locomotive to its new home at Fort Borst Park, track sections were placed along Old Highway 99. After the Locomotive passed over one section of track the track was picked up and moved to the front. The Locomotive stayed in the park from 1956 until 2007.

In 1969, after falling into disrepair and some vandalism, the Centralia Eagles restored the locomotive cosmetically. Several community groups and individuals worked hard to improve the engine. Over the years several options were discussed, yet the city held steadfast to their desire to keep the engine in Centralia. Finally, it was determined the Chehalis Centralia Railroad would be the most logical and appropriate location for the locomotive. In 2007 it was agreed to relocate the #25 to the rail yard where it would eventually be restored and rehabilitated. The restoration is proving to be a long and expensive project. Many missing parts need to be made and replaced. The locomotive is in extremely poor condition. As agreed to, once restored, the city of Centralia name will be prominently displayed on the locomotive and if possible, the popular locomotive will again run between Chehalis and Centralia on excursion runs. 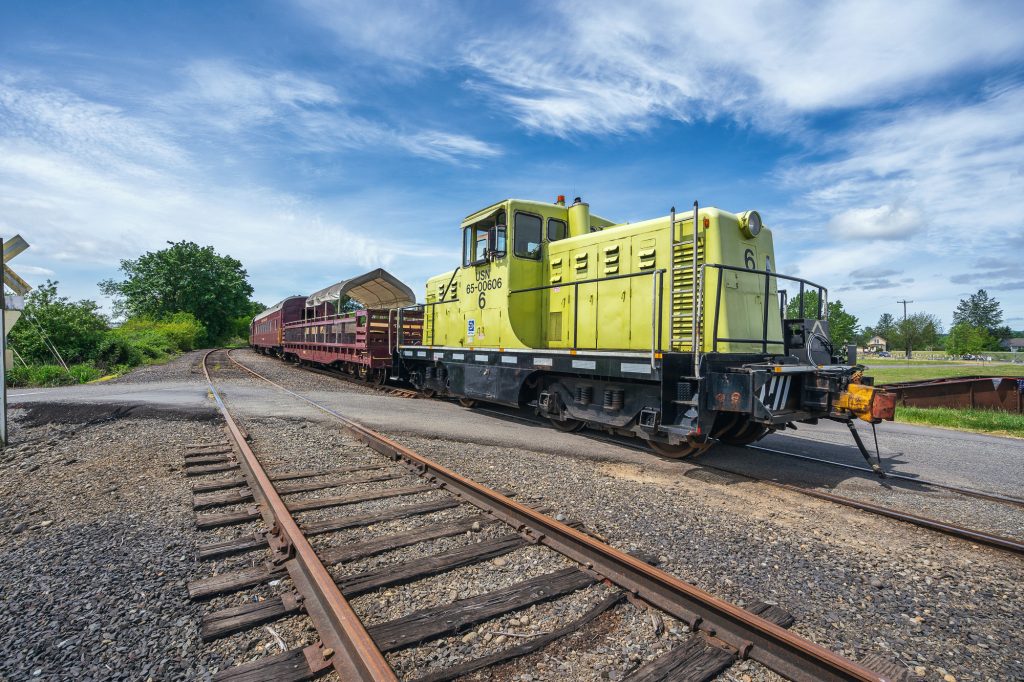 In October 2017, The Puget Sound Naval Shipyard donated an 85’ long functioning turntable to CCR&M.  A turntable is a bridge like structure with wheels below and railway track on top that is used to turn railway equipment.  You often see pictures of turntables in front of roundhouses. Work on getting the turntable to Chehalis began in 2009 when the association learned that the Navy was ready to surplus the turntable. The group enthusiastically voted to pursue the acquisition in order to save a historic item from potential scrapping and to provide an educational display and rail fan draw in Chehalis.  For six years the association kept in contact with the shipyard staff waiting for the word to come and get it. This fall the word finally came and Bill Thompson wasted no time in arranging for cranes and trucks to bring the turntable to Chehalis. The turntable is now stored on a flatcar in the Chehalis yard where it will remain until a site plan is developed and money for installation becomes available. 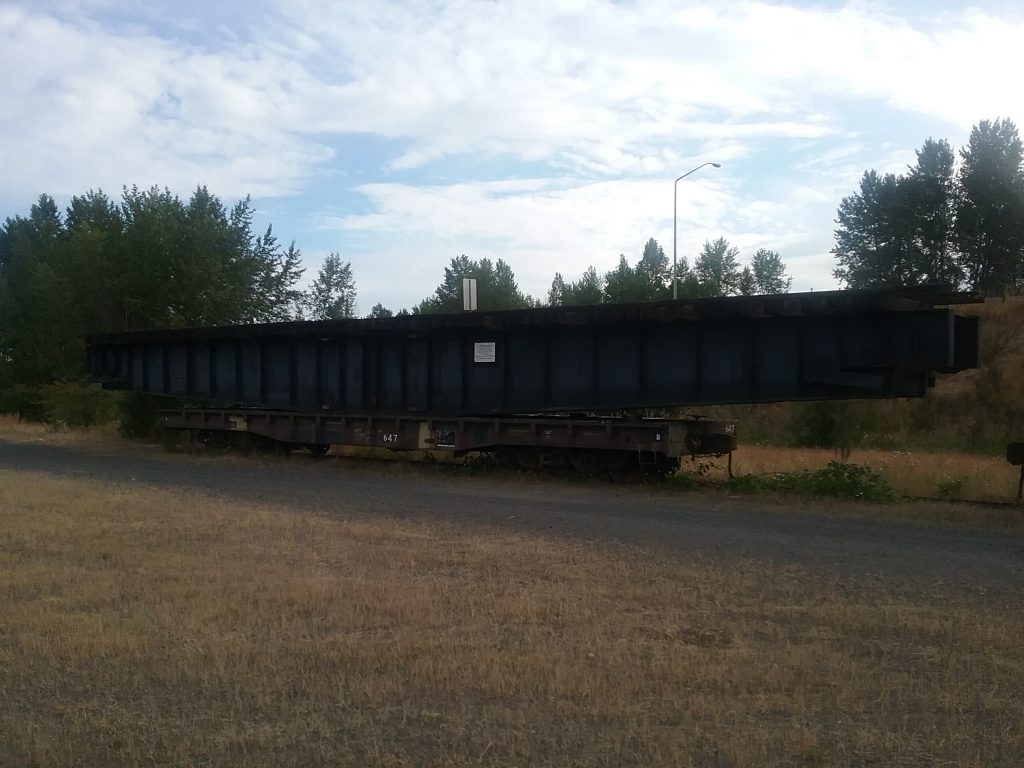 It takes a team of staff and volunteers to restore and operate our classic steam engine and cars. We can’t grow without your help! Your contribution will help us go “full speed ahead” into growing the amazing historic experiences for our guest and community.